High Peaks Birders had its beginning with the monthly strolls offered by High Peaks Trail Association starting in March 2014. Laura Seelbach and Bob Repoley lead the strolls and eventually went on to organize the Yancey County Christmas Bird Count later that year. Both the strolls and the CBC were well attended by birders and nature lovers from expert to beginner.

Springing from these successful ventures, a core group of interested people met in January 2015 with the intention of exploring the possibility of starting a birding club in Yancey County, which was eventually called “Yancey Birders”. The core group, now known as the OWLS, began organizing birding activities in the county and at the same time opened up discussions with High Peaks Trail Association about coming under the “wing” of High Peaks.

In May 2015 after organizing two successful general meetings and contributing to other birding activities in Yancey County, Yancey Birders joined High Peaks Trail Association and took the new name of High Peaks Birders. All of our events are free and open to the public. We do not have a formal membership. Anyone who comes to an event or meeting can choose to be on the High Peaks Birders mailing list and receive our occasional Newsletter. If you do not receive our Newsletter and would like to, simply click on the link “Subscribe Mail List” at the top right of this page. We encourage all birders to join High Peaks Trail Association and support the people who support us.

The OWLS continue to meet once a month to plan programs and activities. These meetings are open to the public. Please feel welcome to attend and take part in what we are hooting about. We also offer monthly birding strolls at Cane River Park and maintain a growing list of birds spotted during these outings. Check out the High Peaks Monthly Activity Calendar for more details.  For some tips on birding, please read our Birding Etiquette Guide.

After seeing a dead screech owl on Hwy 80 recently, I thought I’d pass along a bit of knowledge I learned when working at a Raptor Center years ago.  One of the leading causes of death for raptors is getting hit by cars.  This happens frequently because people throw food waste out their windows while driving (like apple cores, banana peels, and food wrappers).  These food scraps attract mice and other rodents, which in turn attract birds of prey.  The birds get spooked by passing cars and often try to fly away over the road since that’s often the most open flight path.  Many of these amazing creatures get seriously injured or die this way.  I know most of us don’t “litter”, but many of us still throw out biodegradable food scraps thinking it’s harmless.  Please be aware that it causes lots of harm to hawks, owls, kestrels, and other majestic winged creatures.

Ten High Peaks Birders observed 25 species of birds in 2-1/2 hours at Ridge Junction on the Blue Ridge Parkway, at the entrance to Mt. Mitchell State Park, Saturday morning May 4. The drive up started in fog, but ended in beautiful skies and a light breeze, perfect conditions for birding.   The birds themselves were in fine fettle, sporting brilliant fresh spring plumage and feeling their oats with a gorgeous chorus of song. Spring migration was nearly over, and it was time for them to settle down, find mates, build nests, and begin to raise families.   Some of the species observed included Blackburnian, Chestnut-sided, Canada, Yellow-rumped, and Black-throated Blue Warblers, Rose-breasted Grosbeak, Common Raven, Veery, Red-breasted Nuthatch, Hairy Woodpecker, and Least Flycatcher. A large, long-tailed Luna Moth just out of its cocoon made a cameo appearance. We birders left the scene elated by what we had seen and made it home before the afternoon rains. 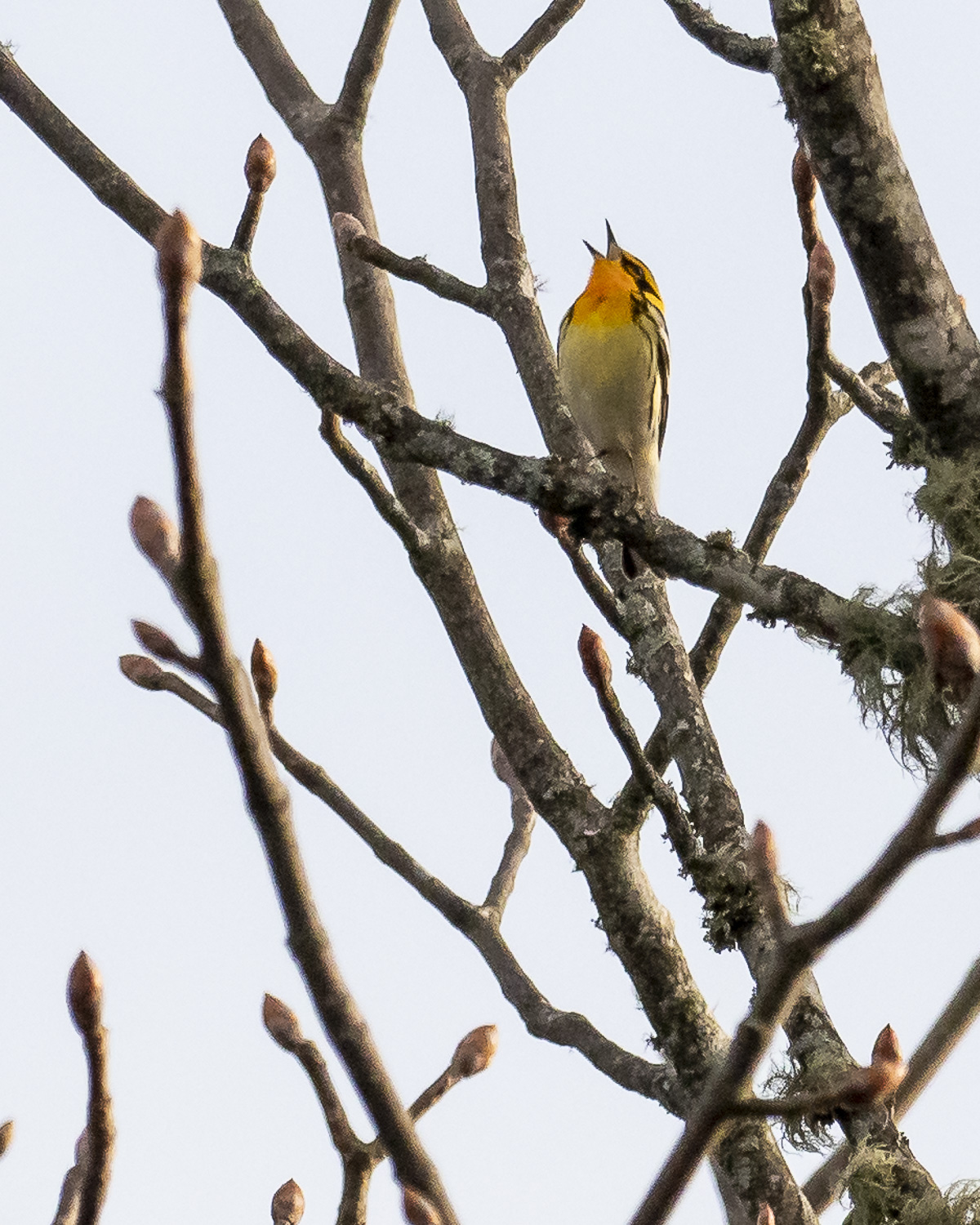 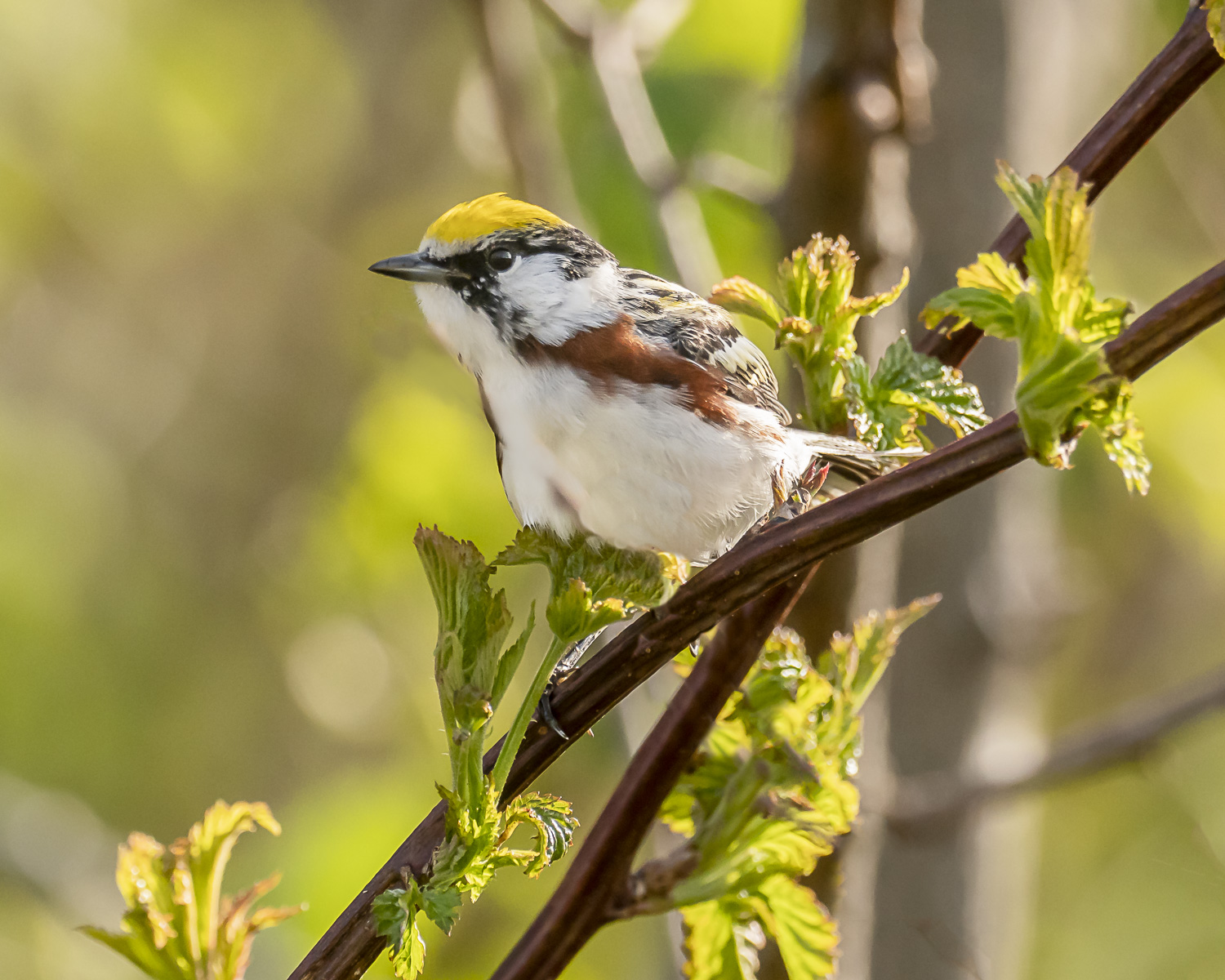 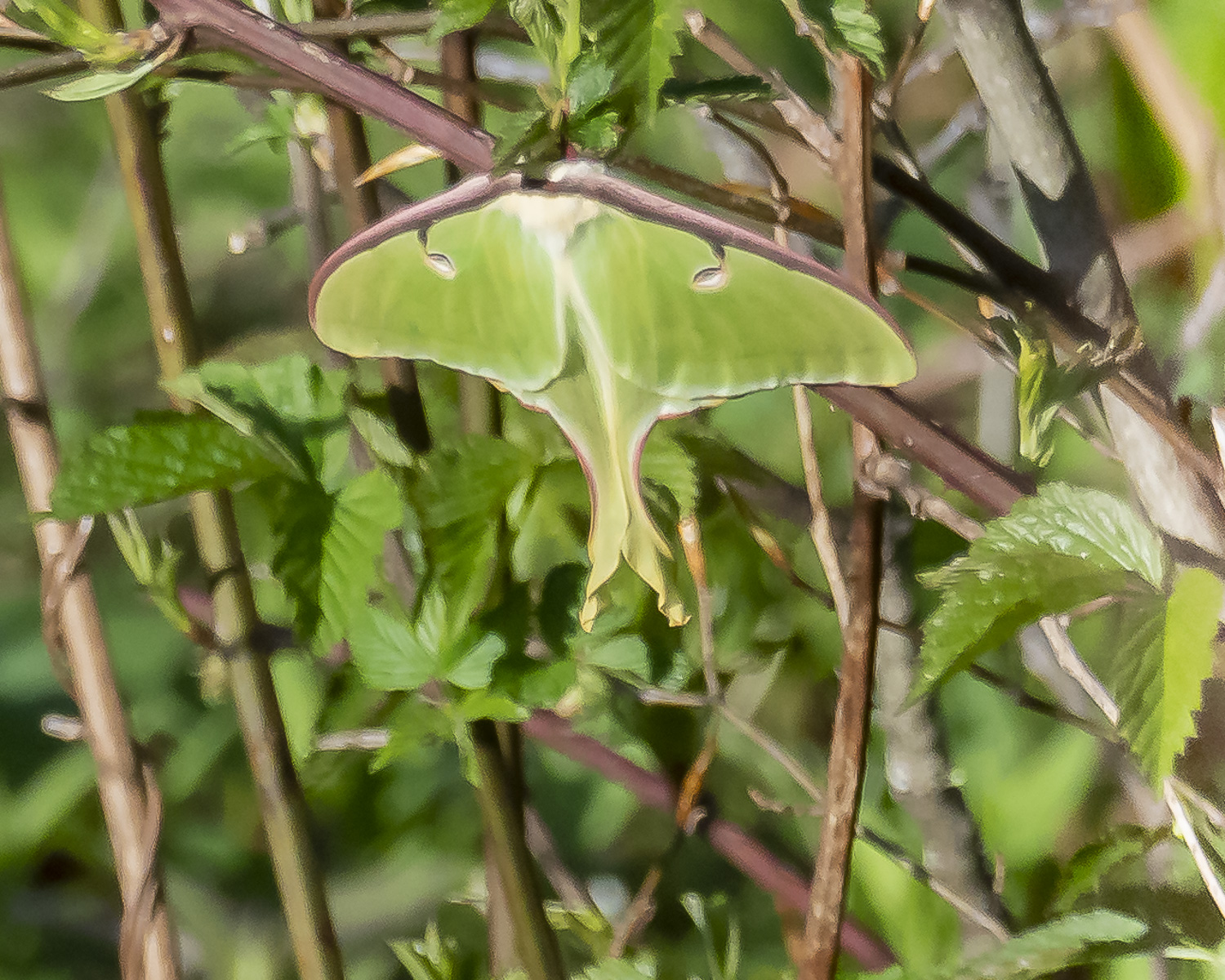 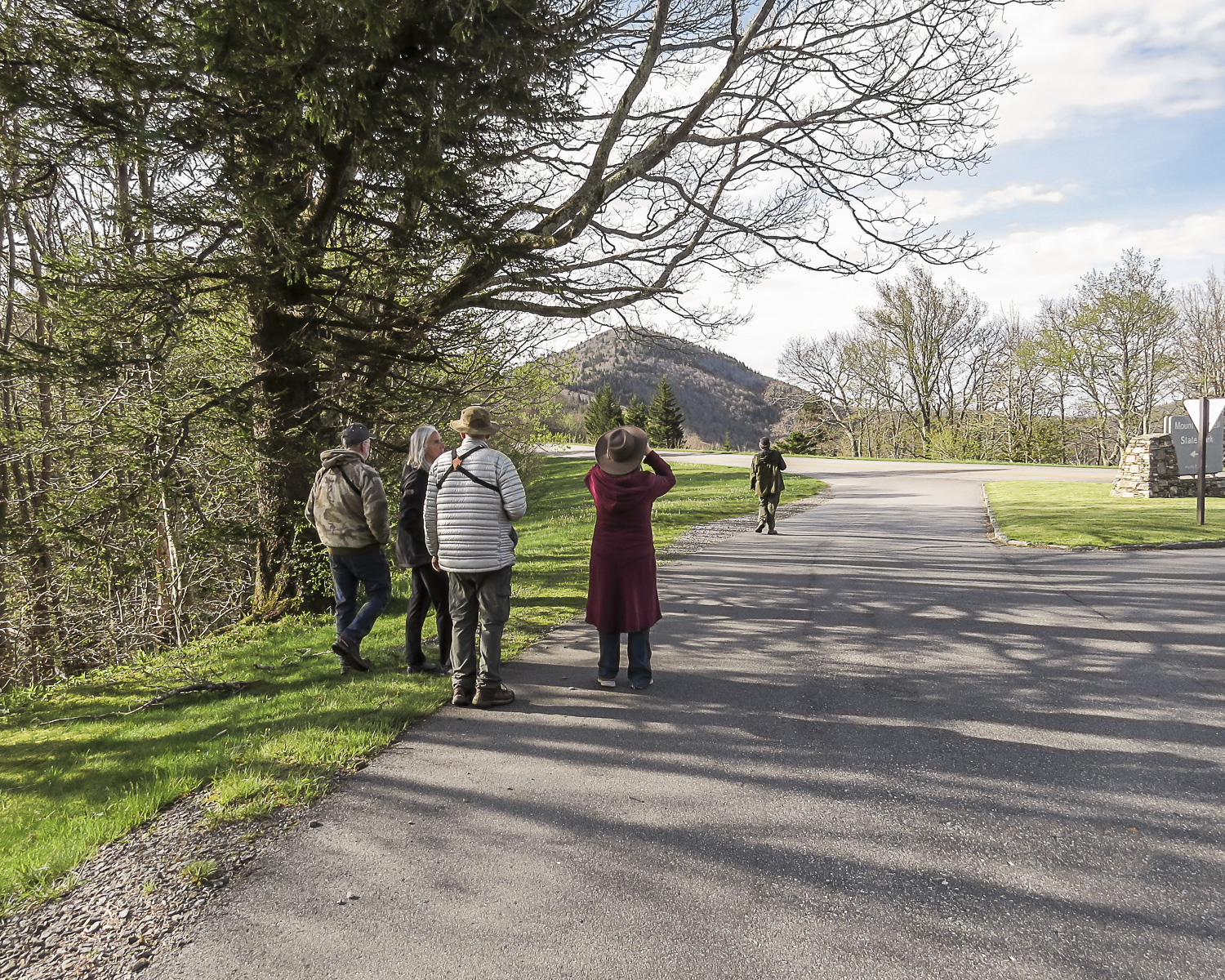 Part of the Birding Group - photo by Laura Seelbach

Bird of the Year: Eastern Bluebird 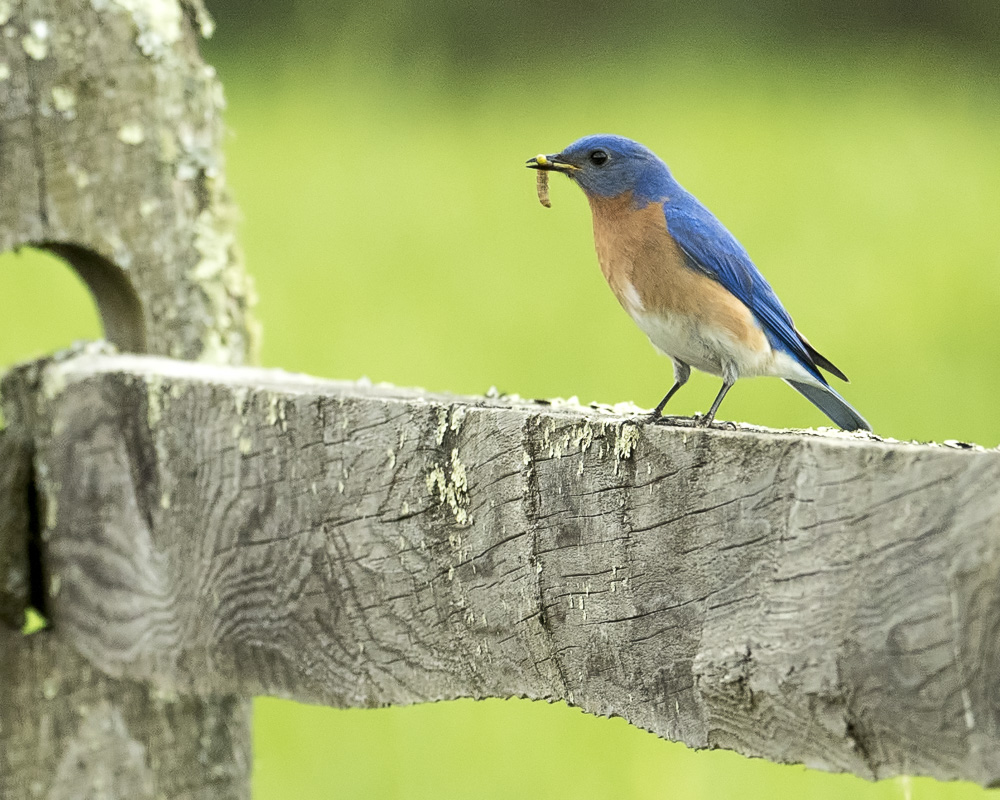 Found only in North America, bluebirds are popular birds, with their bright colors and soft singing. They nest in cavities, which left them vulnerable to introduced starlings who outcompeted them for spaces. The enthusiasm for putting up nest boxes has helped them bounce back in recent years. The Eastern Bluebird is the one found in our area, breeding in semi-open territories with good perches and nesting chances. The male is the one with bright blue feathers. His mate will carry less blue and be a bit duller. They can be found year-round here in Yancey County, feeding on insects and berries primarily. The eggs are blue (what else?) and incubated mostly by the female. Both parents feed the nestlings.

To honor Bob Repoley and all the work he did for birds and the High Peaks Birders, Laura Seelbach and Russ Oates are placing 10 memorial Bluebird nestboxes around Yancey County.  These nextboxes were made by Bob and Russ and can be found at the following locations: Cane River Park, Mountain Heritage High School, Carolina Native Nursery, Yancey County Humane Society, and Mountain Aire. 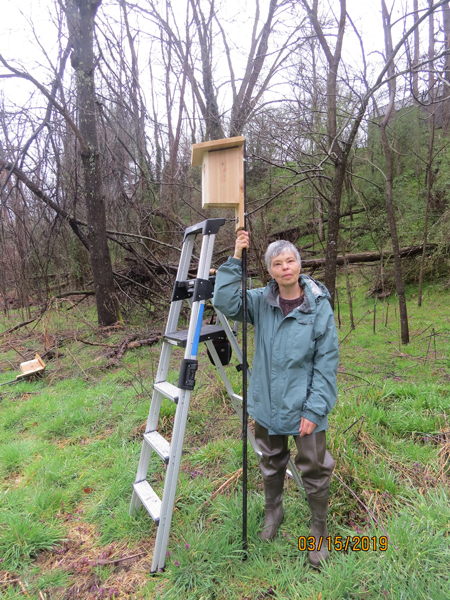 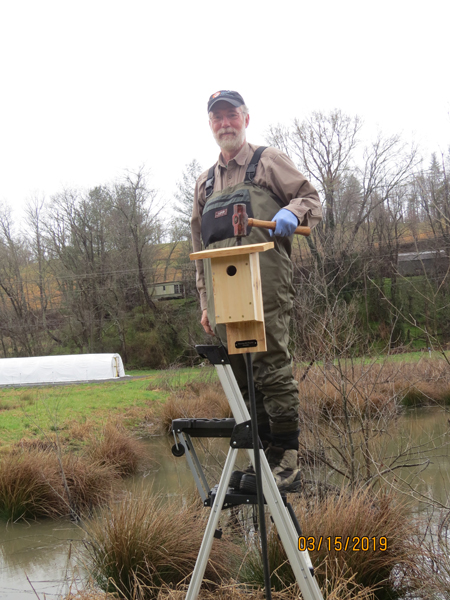 As a result of the 2016 election, the Republicans have control of the White House, the US Senate, and the US House of Representatives. All three of these agree on an agenda of reduced environmental regulations. An example of what they have in mind: the Obama era regulation that halted the dumping of mine waste in mountain streams (to date, over 1,500 miles of streams have been destroyed) was rescinded in the first month of the Trump administration. Known target agencies are EPA, multiple bureaus within Department of the Interior, US Forest Service (Dept of Agriculture). The announced legislative targets I am most familiar with are the Endangered Species Act (the last hope for an increasing number of species), and the Migratory Bird Treaty Act (MBTA, the bedrock for protection of migratory birds for 100 years despite powerful opposition). You will recall that the US House of Representatives advanced a bill last year that would have eliminated all enforcement funding for the MBTA. This would have effectively repealed the Act had it passed. Other targets include the Clean Water Act and the Clean Air Act. The stars are now aligned for the extreme anti-environmentalists to take the teeth out of any and all legislation that results in environmental protection. Not surprisingly, this has alarmed conservation organizations and scientists across the country including National Audubon, The Wildlife Society and the American Bird Conservancy (ABC). The American Bird Conservancy has take the step of preparing a sign-on petition to the US Congress urging them to maintain protections for migratory birds. The OWLS discussed this topic and decided that High Peaks Birders (HPB) would sign on to the petition. Since we are organizationally affiliated with the NC High Peaks Trail Association, our representative to their Board of Directors asked their opinion about the HPB signing on to the petition. Not only did they approve, they signed on as well. A note to HPB members: please consider calling or writing a personal email to each member of NC delegation to Congress that represents you (Sen. Tillis, Sen. Burr and Rep. Meadows) and urge them in strong terms to maintain protections for birds. The link for the ABC petition:

Thanks for helping the birds!

Other Links Of Interest

Beginner’s Guide to Bird Watching Around Your Home : This is a great source of information about birding for beginners.

May Wildlife Rehab Center:  This is an outstanding rehab facility for injured or orphaned birds and other wildlife located on the Lees McRae campus in Banner Elk, NC.

Cornell Lab of Ornithology:  A great site for bird ID and bird webcams.

Partners In Flight:  An organization that coordinates international efforts to conserve bird populations in the Western Hemisphere.

Bird Note:  Podcasts and stories about birds, the environment, and more.

Carolina Native Nursery:  A great source for native plants that will attract birds and other wildlife.

Creating Wildlife Habitat in Your Backyard: Information on attracting all kinds of wildlife to your property as well as links on how to create a certified wildlife habitat.

Beginner's Guide to Birdwatching: Tips and ideas for blossoming birders.